An Inquiry Into Values

Zen and the Art of Motorcycle Maintenance: An Inquiry Into Values
Robert M Pirsig,

I'm midway through my solo motorcycle adventure across the great land of Australia and have just finished reading Zen and the Art of Motorcycle Maintenance: An Inquiry Into Values by Robert M Pirsig (I know, I know, how corny right? Nevertheless, it’s been a great companion for the past month or so). It was first published in 1974 but is very relevant today I reckon, maybe more so. I read it as a contemplation on living ‘right’, not necessarily ‘right’ according to a set of morals or truths but to an inner clockwork, a spiritual commonsenseness that follows a natural rhythm, kind of like following your heartbeat rather than a doctrine or someone else’s heartbeat. 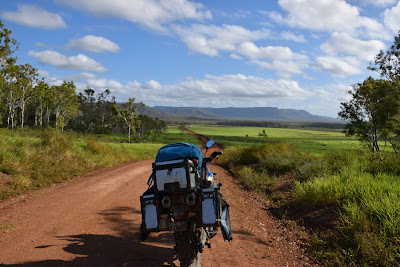 Within a social framework governed heavily by so called ‘rationality’ and ‘truths’ and less so by humanness and ‘quality’, Pirsig examines how a convergence of dualities into a unified state of being can assist in living according to a more natural rhythm, which I think paradoxically unifies all living and non-living things. Pirsig is talking about the quality that derives from the coming together of ourselves and our external world and the coming together of ideas too. It’s about perspective and attitude. If my reading of Motorcycle Maintenance is accurate, Pirsig suggests that by eliminating the mental separation that a dualistic approach to the world sets us up for we can derive peace and satisfaction while engaging with this world.

It’s the third time I’ve attempted reading this book. Both other times I got three quarters of the way through before abandoning it (I think I got distracted by…Squirrel!). Probably, the timing was at odds with my then way of seeing and being.

I can understand the sentiment expressed in Motorcycle Maintenance, for I’ve been insane. I’m fortunate enough to have seen my insanity in front of me and made peace with it. I think I’m now somewhat unified and integrated. There is a truth in the text quoted above that resonates strongly with me: to have seen the mythos in which we live for what it really is, to have seen through its contrivance and connivance and to understand that it’s not only not necessarily real, but that I don’t necessarily have to subscribe to it either; that it’s outside of me and I can be outside of it. Not an easy thing to do, but it is doable. Complete social self-banishment is not the answer, nor appealing to me; it’s lonely outside of the mythos. Still, I am sane enough to know that I can be sane and at peace with it by practicing a mental and spiritual distance and detachment from it. But it is a practice.

I have tried practicing the dominant mythos. I think this is easier than the alternative…for a time anyhow; but it takes some form of numbing or practiced self-delusion (for me anyhow). To choose the dominant mythos over the alternative, for me, is kind of like buying into the latest Danoz Direct workout machine. It looks so easy! You know the kind…the machine that does all the work for you? It looks ultra-futuristic and you can do it while watching TV and you don’t even break a sweat. Kind of as though you’re not really working out at all. And the expected results, I think, seem self-evident. To practice the anti-mythos is much harder and requires mental and spiritual effort. This is, I think, why it is the road much less travelled. I know I have avoided it for much of my life, and still am much of the time.

But I am practicing practicing it. And this creates a good feeling, a feeling that I’m in the right place at the right time. Practicing implementing ‘quality’ into my everyday. Practicing being present. Practising living my life according to a simple principle of oneness. This can be done within and without the mythos, but for me, much of the dominant mythos is not conducive to this way of being. So one must act accordingly.

I am acting accordingly, some of the time. Riding a motorcycle is one example. Riding a motorcycle is not necessarily a radical act, but it’s one act that is in rhythm with my heartbeat. Riding a motorcycle around Australia, with minimal comforts (and despite the risks involved) is too. The very physical act of riding a motorcycle is more in tune with my natural rhythm, than say, driving a car or being a passive passenger. My body is closer to the mechanics of the technology, physically and practically; it leans and twists and tightens and loosens with the momentum and movement of the bike. I am exposed to the elements, I feel them, experience them; it’s exhilarating, even at slow speeds. And I am less encumbered when travelling on a bike. This too agrees with me. I’ve also discovered that working (sitting) in an office is anti-rhythmic to my heartbeat. So, I am constantly practicing reorganising my life to fit in with my heartbeat. But it’s my heartbeat. I imagine everyone’s is different.

Phaedrus was in fact insane and one part of a split personality (although later in the narrative it becomes ambiguous which of the personalities is the sane or desired). It’s in the reunification of his two parts that peace is found. With peace, quality in all things is more probable. And to act out of quality is to make peace more possible. To blindly go outside the mythos is to become insane. But to gain awareness of and accept this process is to be reunified, to be at one with.
adventure dualism insanity motorcycle Robert M Pirsig sanity society values Zen and the Art of Motorcycle Maintenance