I really loved watching Bali’s street dogs strutting their doggy stuff while I was there for a week. Wild and seemingly threatening, they roam the streets and beaches doing as they seemingly please. But I never once witnessed them to be actually or potentially harmful to humans in any way. Of course many do have rabies and do potentially pose a health risk (although many have been treated for rabies by the State —they're the ones wearing collars).

What I observed and loved was that they seemed mostly unfazed by and uninterested in humans. Sometimes they would engage and play with us. Occasionally whilst sitting on the beach after a swim one of them would come and just sit right in front of me or next to me (not sure why...). But generally they stick to themselves, strutting and chasing and sniffing and pissing, barking and fucking, scrounging and sleeping, without daily subjugation or deprivation of their natural instincts and faculties. They looked pretty happy and peaceful, actually, amidst their, by Western standards, second rate conditions. And they are some of the freest doggy souls I have ever seen. Especially when juxtaposed with the dogs of Australia. 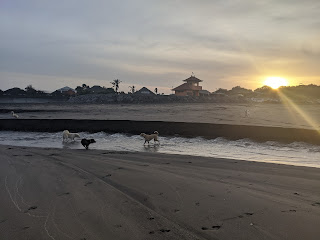 I’m sure there must be some incidents between the scruffies and humans, but I didn’t observe any. And having surveyed some of the locals, they seemed unperturbed by them and there was a general affection for them too.

Rarely did I see dogs on leashes in Bali. Except when internationals walked their dogs. It was funny to observe how some of the local muts looked on with bemusement as their captive brethren were paraded before them. There seemed to be a little sadness in their eyes too and a frustration in their demeanour that their tethered friends couldn’t frolic with them for a while. Probably just me anthropomorphising.

I am aware there are cultural and social forces that inform each country’s relationship to dogs, and that comparisons aren’t really useful. Still, the comparison was glaring and shrouded in symbolism to my mind. Sure, Australian dogs have shinier coats and almost 24 hour attention from their loving and doting owners, they are largely protected from any human-perceived dangers and are guaranteed a daily well balanced meal. But Balinese dogs exude an air of zen like connectivity and their body language is that of confidence and sovereignty. They seem to have avoided having their nature bred out of them and surgically removed or their natural instincts bribed out of them with tasty treats. No, they live pretty closely aligned to their authentic selves I reckon.

But I’m sure this is all a bit simplistic and just my romantic and biased sociological perspective overcoming me... 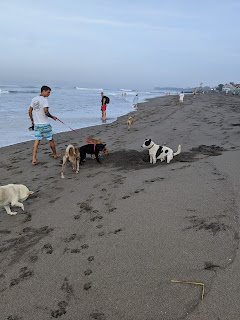