Life and Death (A Love Story)


It’s difficult at first for me to imagine...to truly imagine...dinosaurs alive and inhabiting earth. Film and television, in collaboration with paleontology, attempt to foster or conjure the imagery, but it is still, despite the science, quite fantastical. It’s a story, mythology, in my mind. However much I try, I can only fantasise about how it would be. I mean, at least the story of Jesus has some semblance of a connection to reality, to ‘history’, through the written word (albeit a history written by men and manipulated by the original church patriarchy). But just imagine, living creatures up to 190 feet long and 60 feet high traversing the earth. Imagine the territorial skirmishes, the stampedes, the terror they would instill within a human psyche, past or present. The primal violence, and, sure, the majesty too, of Mesozoic existence confounds me. And so I imagine Mesozoic earth would have been quite inhospitable to hominoid types like us. 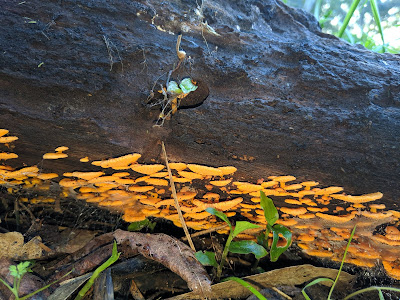 My research (some Googling) suggests humans would not have fared well during this period, if they would have evolved at all. There are so many factors to consider, but it wouldn’t have looked promising. So, had dinosaurs not become extinct, even if humans did somehow eventuate it is highly unlikely they’d have evolved and flourished into the conscious and intelligent species we are today.

They died so we could live...the dinosaurs. They had to, insofar as we are who we are, that we exist. Otherwise we wouldn’t exist. We exist because they died. It makes me think of the historic existential relationship between oil and whales: it is suggested, quite reasonably I think, that it was thanks to the discovery of oil that whales were not hunted into extinction. For, whales preceded subterranean earth as our main source of oil. Something dies so another can exist. It’s probably not a zero sum game, but an intriguing idea nonetheless.

Observing the history of life on earth, there seems to be a movement toward ever greater complexity, from the micro (single cell organisms) to the macro (dinosaurs...humans) and then to the material micro again (with exponential technological advancement), but always towards consistently greater complexity and seemingly greater intelligence. Observing the history of my self I see a parallel analogous process, but also, paradoxically, through my ever greater psychological evolutionary complexity there is also a beautiful spiritual simplicity that emerges.

This, I guess, presupposes that humans are the highest forms of intelligent life on earth and that it is essentially a good thing that humans evolved. Of course it is (others may disagree). Otherwise I wouldn’t exist. Nor would I be writing this. But a better argument than this is that I do exist and we did evolve to this moment in time and hence it is the only reality and the only way it could be. No other set of circumstances could have manifest into this moment (in this dimension or universe anyhow), for it didn’t. I’m sure there is a well thought out philosophical theory somewhere out there that articulates this notion of which I am not doing justice.

Death is good. As is life. If we are essentially good, humans that is, then it is also good that other life forms died for us to live. And it must be good that we too die. Ok, if you don’t want to use the word ‘good’ than maybe essential’ or ‘incidentally necessary’? I don’t want to overlay any morality onto this subject, rather my use of the word good is more of a recognition of what is, an acknowledgment of the extraordinariness of life and us.

"The idea of death, the fear of it, haunts the human animal like nothing else; it is the mainspring of human activity—activity designed largely to avoid the fatality of death, to overcome it by denying in some way that it is the final destiny for man."
…
"The noted anthropologist A. M. Hocart once argued that primitives were not bothered by the fear of death... [rather, it] was, more often than not, accompanied by rejoicing and festivities...an occasion for celebration rather than fear… To be sure, primitives often celebrate death—as Hocart and others have shown—because they believe that death is the ultimate promotion, the final ritual elevation to a higher form of life, to the enjoyment of eternity in some form."
Then Denial Of Death, Ernest Becker

It seems to me that the general disgust we seem to experience about the idea of death is a symptom of a supreme disconnection from everything, from oneness with everything and everyone and perhaps from that great creative energy that some call God...and a disconnection from oneness with ourselves. It is the ultimate individuation. And I suppose this is a recent cultural phenomenon of late Capitalism—pervasive and suffocating. If it is true what Hocart surmises about our primitive ancestors, then something has possibly changed or is changing within our species or culture. Maybe for good reason. Perhaps it is part of the super-intelligent blueprints that has us hurtling towards some greater evolutionary destiny. Or towards extinction for something greater to emerge. Perhaps we are the dinosaurs (well, some of us).

Everything is a microcosm of the macro. Patterns repeat from the infinitely large down to the impossibly minute. It can’t necessarily be proven or even backed up with science, but I think it can be observed and sensed. Like when you look at photos of galaxies, of our universe, they appear neuron-like, as if the universe itself is a kind of brain. The expansion of the universe from the supposed big bang, perhaps this is but one breath in, an expansion of the lungs of time (I can’t wait for the exhale!). There is a universe in every particle. And there is a natural rhythm, laws that govern the material and spiritual realms of our lives. Following the lead of the macro opens me up to greater harmony at my relatively micro level.

Analogy and metaphor are powerful teachers, so much greater and clearer than factual or literal. For, some things are too complicated or maybe too simple to be grasped by our rational minds. Maybe rational is the wrong word. It’s like trying to explain love. We can only ever point to it, paint landscapes, allude to it through poetic cryptography, gesture it, live in and from it.

For me to evolve into my best self (which is ever changing, as it must be), I need to allow and even foster death over and over and over again. The death of myself from one moment to the next, the death of ideas and beliefs, the death of what I did or who I was yesterday. I must be willing to let go of yesterday’s Andrew and all he interacted with and did and said and thought. I must be willing to let die resentments and anger and hate and judgements. I must let lay to rest my attachments and expectations of the future, without sacrificing hope and the joy of possibility. I must be willing to let die on a funeral pyre my self-hate and non-acceptance of self and others and the world and learn to forgive myself and others and the world, again and again and again. For it is through death that I nurture life.
change death evolution life transformation